Exxon Mobil recently announced a renewed partnership with Fuel Cell Energy aimed at bringing Carbon Capture and Sequestration (CCS) technology into mainstream usage. The two companies have been collaborating on the project for several years and the latest announcement may be seen as a re-affirmation of Exxon’s investment in the program.

The process of carbon capture prevents carbon dioxide (CO2) generated by fossil fuel powered power plants from being released into the atmosphere. The carbon dioxide is instead transported to an underground storage facility. While seemingly straightforward, CCS technology has thus far eluded commercial application.

What makes Fuel Cell Energy’s CCS different? According to the company, conventional carbon capture technology requires large amounts of energy (and cost) to separate and compress carbon dioxide while Fuel Cell Energy proposesa system which it says “cleanly and efficiently converts chemical energy from hydrogen-rich fuels into electrical power….” Exxon predicts a 500-megawatt power plant powered by this type of CCS could actually produce 120 megawatts more energy than a conventional power plant versus say traditional capture technology that requires almost 50 megawatts of power to simply separate and convert the CO2. In other words, this new type of CCS would actually create useable energy in the process of storing CO2  produced by a conventional power plant.

Fuel Cell Energy has already deployed similar technology in more than 50 locations worldwide, although never directly connected to a power plant. The technology could hold great prospects for the future, especially in areas where the continued use of fossil fuels is likely to continue. For example, Germany has continued along a path of building new coal fired power plants despite carbon outputs in an effort to retire nuclear generation facilities. 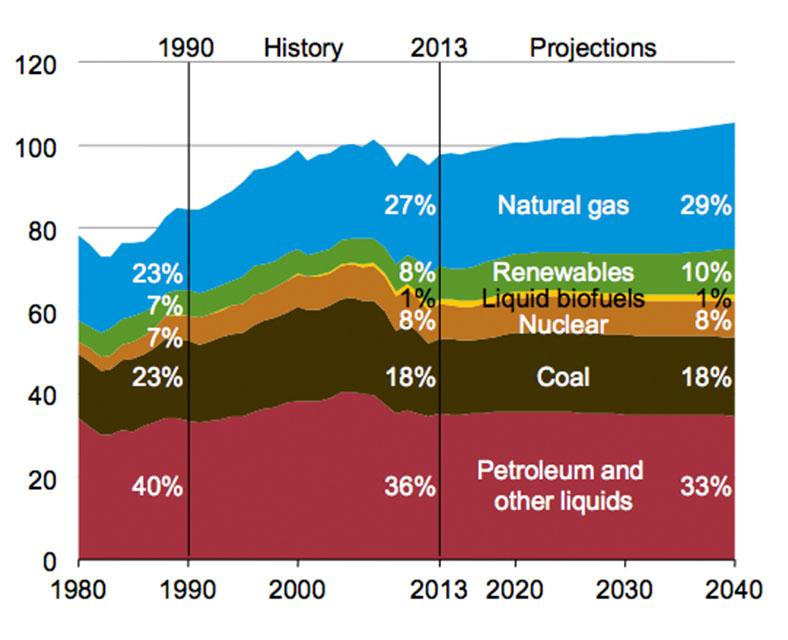 While renewable energy comprises an important component of our energy portfolio, fossil fuels will remain imperative for the foreseeable future. Renewable technology currently lacks the maturity, advancement, stability, or size to completely provide enough power for the U.S. today. As illustrated inFigure 1 above, the U.S. Dept. of Energy, or IEA, predicts the world’s economy will remain dependent to a large extent upon fossil fuel until 2040 and beyond. The new CCS technology proposed by Fuel Cell Energy could serve as an important bridge until renewable technology is ready to meet the challenge.