Recap of Obama’s 2013 State of the Union Address

Yesterday’s pre-speech article discussed what pundits and experts thought would occur during last night’s SOTU speech. By and large, the beltway crowd was fairly accurate.

The President’s opening was reminiscent of his first address when he offered an olive branch to the Republicans. Recalling John F. Kennedy’s words that “the Constitution makes us not rivals for power but partners for progress.” With that however, the gloves were off and President Obama went after the opposition for everything from “a decade of grinding war” the “grueling recession” and the “rubble of crisis.”

In the spin rooms following the address, the President’s supporters pointed out that indeed Obama was responsible for ending the Iraq and Afghan wars, that al-Qaeda (which interestingly means “The Base”) had been largely left leaderless albeit still intact, and that “our businesses” had created over six million jobs. There was no mention however of the fact that the economy actually shrunk during the last three months of of 2012. 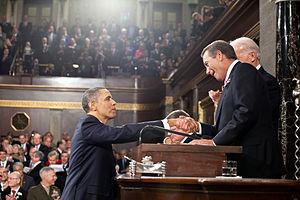 The speech itself was classic Obama, and very well delivered. When addressing all of the victims of gun violence, he injected the need to bring gun control legislation to a vote by repeatedly saying, “they deserve a vote” to the applause of Democrats and gun control advocates. The Republicans for their part were generally respectful during the speech. Some thought Speaker Boehner could hardly restrain his disdain for the President, and failed to stand when a 102 year old was recognized. Those comments always seem to come down to the partisan crowd, and for the record, he was applauding. One thing was for sure; the Speaker wore a great tie.

On the issue of gun control, Republicans were ready to point out that bad guys get guns and they were factually correct when they mentioned that crime rates are generally higher in cities and areas with stricter gun control laws. The NRA would certainly agree with Robert A. Heinlein’s famous quote “an armed society is a polite society.”

President Obama called for raising the minimum wage to $9.00 per hour, taking credit for strong border security, and making quality preschool available to everyone. He also mentioned the need for immigration reform, yet not to the extent supporters had hoped, and he chided the mortgage industry for turning away “too many families with solid credit” yet failed to mention much in the way of specifics for his assertions or plans for much, including the “Fix-it-First” infrastructure program.

The truth is that despite his goal of not raising the deficit, most of the programs discussed would in fact require even more government spending. The Highway Trust Fund, responsible for highway and transportation projects, is nearly insolvent. The 18.4 cents per gallon gas tax isn’t enough to fund our infrastructure. That rate hasn’t been adjusted since Reagan was President and perhaps it shouldn’t be changed. Today’s highway trust fund is used to fund everything from trucking safety to transit programs to high sped rail. Speaking of rail, Obama renewed calls for more of it, despite uniform agreement among experts that the cost and ridership numbers do not and cannot add up.

The President did offer to enter into negotiations with Republicans over Medicare reform, yet the olive branch seemed modest at best. He offered no relief to the sequestration cuts ill-conceived by congress, and signed into law by, umm, the President. His solution to the deficit remains, tax the rich.

To the Republicans, President Obama simply does not understand the economy, and he does not understand that in order to raise revenue, it is far more palatable to grow the pie, than to take a bigger slice in taxes. They argue, and many economists agree, that raising taxes, and increasing government regulations is in fact counterproductive to growing the economy. Disappointingly, the President offered no new solutions. Perhaps the Republicans would have been better off reciting Reagan who once famously said, “We don’t have a trillion-dollaw debt because we haven’t taxed enough; we have a trillion dollar debt because we spend too much.” But then again, a trillion dollar debt then seems somewhat insignificant against a sixteen trillion dollar debt today.

On the energy front, Obama did not give the oil and gas sector the credit they most likely deserve. The Institute for Energy Research was quick to pile on with a release which said the President “seems to misunderstand the reason that manufacturing jobs are coming back to America and why domestic oil and gas production are on the rise.” IER President Thomas Pyle suggested that brighter economic times have happened “despite the president’s policies, and not because of them.” Others also pointed out that increased gasoline costs were a product of Obama’s EPA coupled with his monetary policies, but unless you are an economist or policy expert, blended gasolines and qualitative easing are hard to sell talking points, no matter how accurate.

The energy industry was also quick to point out that much of our economic growth can be directly tied to the rise in domestic energy production. While that is certainly true in areas like North Dakota and Texas, other economists have pointed out something republicans have largely missed. Those states with a lower tax burden and pro-economic, limited government and pro-growth policies (like those Washington Republicans have in artfully championed) are indeed responsible for a significant portion of economic growth.

The IEA also pointed out that despite President Obama’s cautious embrace of energy during his speech and the need to cut the red tape. According to them, it currently takes 300 days to obtain a permit to drill on federal land versus 10 days in North Dakota. The Congressional Research Service also seems to validate the point when it stated that 96% of increased oil production has occurred on non-federal lands.

Despite the rhetoric however, the U.S. is indeed in the midst of an energy renaissance, and for the first time in a generation, the country is on the precipice of becoming North American energy independent, if the Obama Administration is onboard. “If” is indeed the big question as the President immediately shifted to the continued need to urgently address climate change “and act before it’s too late.” To that end he urged the creation of yet another government group to channel oil & gas revenue into an energy security trust to help renewables.

For the supporters, and opponents of the Keystone pipeline, he offered little in the way of assurances, and probably increased unease on both sides. On one hand, he is touting the need to increase manufacturing for the middle class in order for the country to produce more “Made in America” products. KXL supporters point to the benefits of refining North American oil into petrochemical, plastics and refined gasoline as a job creator and “Made in America” product regardless of where it is eventually sold.  Opponents will take heart in the need to urgently address global warming, now known as “climate change.”

The President also touched on a few foreign topics including a veiled reference to drone strikes as well as the need to remain vigilant against North Korea. The largest applause by all came when he re-affirmed American support for Israel, which he intends to visit for the first time as President, sometime this Spring.

Ultimately the State of the Union did exactly what it is supposed to do these days, place contentious policy decisions right in the lap of an ineffective and somewhat paralyzed congress.