A little over three years ago, a high-pressure natural gas transmission line erupted in the quiet neighborhood of Crestmoor, in San Bruno, California. The resulting explosion and fire was catastrophic. Eight people died and thirty-eight homes were destroyed. 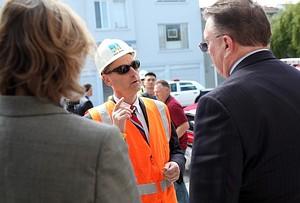 The company held responsible, Pacific Gas and Electric (PG&E PCG -0.98%), has paid a heavy price, but is it enough? To date, the company has paid approximately $565 million to compensate victims and their families and more than $120 million to rebuild San Bruno. In addition, PG&E’s shareholders have financed over $1 billion of infrastructure improvements and the company has undergone a vast corporate shakeup which included separating its gas and electric businesses.

Short of traveling back in time, how much is enough to make things right? Many in California believe PG&E has already learned from its past mistakes. Others, including a few very vocal opponents have recently traveled to New York where they have been pitching a tar and feather approach to the editorial boards. This small minority believe a much larger fine is in order and are lobbying regulators to impose fines and penalties totaling nearly $4 billion.

As the first leader of the federal Pipelines and Hazardous Materials Safety Administration (PHMSA), I know first-hand the importance of imposing tough penalties on any company not living up to their obligations. I helped implement some of the largest fines in history in order to punish offenders and to protect both people and the environment.

Regulators must keep the goal of enforcement in mind whenever considering action. Voluntary compliance with the law is the objective, and I have found that penalties and fines alone rarely, if ever, achieve this goal.

Safety is only effectively achieved when regulators utilize a combination of available tools to bring about a true cultural change in the regulated entity. Enforcement is very important, but so too is effective and continuous oversight by competent and attentive regulators.

Regulatory enforcement must focus on changing a company’s culture to embrace safety as a core value. Don’t get me wrong, PG&E’s past lack of attentiveness is inexcusable, a point I made publically shortly after the incident. That said, the company’s actions are consistent with best safety practices. In other words, PG&E is both talking the talk, and walking the walk. A punishment that is too severe could have the perverse impact of undermining the very safety sought through enforcement. Safety is not served, and must not ever take a back seat to those seeking to punish a company, no matter how satisfying.

Take for example Standard and Poor’s revised outlook on PG&E, from stable to negative earlier this month in anticipation of the company having to pay the proposed fine. Moody’s, one of the nation’s top credit agencies, also hinted at the full implications of enacting this fine; “[the fine] does not bode well for the regulatory environment in California, which is being adversely affected by political considerations.”

PG&E argues that the proposed fine is excessive. While such an argument is to be expected from the company, it does hold some merit. In 2000, the El Paso EP NaN% Natural Gas Company was fined $100 million for a pipeline explosion that killed 12 campers in New Mexico. That fine is still the largest gas penalty on record.

PG&E should pay a substantial fine, but not to the point where it endangers the company’s long-term health. Extracting that extra pound of flesh may seem appealing, but such an approach is contrary to the basic tenants of safety and regulatory oversight. Statements such as wanting to bring the company to within a dollar of bankruptcy may be well-intioned; but they are counter-productive at best. Should such a scenario unfold in California, PG&E would likely be forced to forgo capital improvements and safety upgrades in other areas. Even assuming the company could borrow additional funds to pay the penalty, they will pay a much higher borrowing rate which ultimately results in higher energy costs for the very last group of people who should be impacted; PG&E’s own customers.

Let me be clear – PG&E was wrong and must endure the appropriate financial and legal consequences. For these reasons, I believe the CPUC got it right when it initially proposed fines and penalties that recognized investments made to improve the safety of the system and dedicate 100 percent of the penalty toward system improvements, not to the general fund where it will disappear and not advance energy safety.

Long-term oversight is necessary to ensure the company completes its transformation. It is a journey PG&E must take on its own, but it is also a journey which at times requires a study hand of encouragement and prodding by regulators and the community. Such an approach will ensure the success of this five to seven year transformative process. Change is difficult, but it is even more difficult without the right blend of oversight and support.

For this reason, cooler heads will likely prevail, and the CPUC should ultimately choose maximizing safety over those who seek to maximize retribution. The fact is that a regulatory agency cannot, under any circumstances, allow private concerns or personal biases enter into the decision-making process. Like them or not, PG&E is not optional for the millions of Californians who rely upon the company being able to deliver electricity and natural gas to their homes and businesses.