Five years ago today, TransCanada TRP +0.57% the Calgary, Alberta-based corporation filed an application for a presidential permit to build an extension to the Keystone Pipeline. The addition was dubbed “Keystone XL,” (“KXL”) and was intended to add capacity to the existing pipeline. The Northern part of the pipeline would transport Canadian and U.S. oil while the southern component would carry U.S. and Canadian oil to Gulf Coast refineries.

For the last five years, KXL has been continuously debated, studied, reviewed, analyzed and reanalyzed in response to assertions by opponents of the project that development of Canadian oil sands will lead to something tantamount to ecological Armageddon.

Keystone opponents see derailment of the pipeline as their last line of defense against the large-scale importation of Canadian bitumen. According to opponents, once the pipeline is complete, it will be too late to save our air, land and water.

The opponents of Keystone are mistaken, however, and here is why. 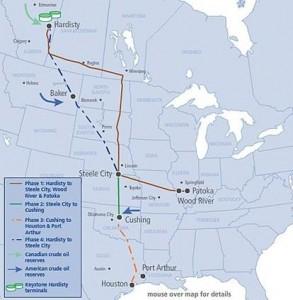 The Current and Proposed Keystone Pipeline System. Phase I and II are in operation. Phase III (KXL South) was approved by President Obama last March and will begin operating in early 2014. Phase IV (KXL North) awaits a Presidential Permit and is opposed by environmentalists. (Credit: Wikipedia)

Keystone is not a single pipeline, but rather a series of pipelines running between Alberta, Canada and the massive oil distribution system in Cushing, Oklahoma as well as to Midwest refineries.

In the nearly 1,800 days since TransCanada filed its application, thousands of miles of the Keystone pipeline network have been built and put in operation, or are nearly complete. Canada provides over 2.5 million barrels per day of oil to the U.S., with the existing Keystone transporting 600,000 barrels each and every day.

In March of last year, President Obama stood among KXL pipe produced by workers in Arkansas and famously announced that he was approving the Southern portion of KXL. Extolling the virtues of the pipeline extension for job creation and economic prosperity when he announced, “Today, I’m directing my administration to cut through the red tape, break through the bureaucratic hurdles, and make this project a priority, to go ahead and get it done.”

President Obama not only approved KXL, he issued an executive order to expedite the project which has employed thousands of union workers and is now 95% complete. Beginning in early 2014, Keystone will begin delivering 800,000 barrels per day of Canadian crude to the Gulf Coast. Opponent’s main argument centers on the ability to stop Canadian oil from reaching the Gulf Coast. That argument is flawed given the 2.5 million barrels we receive from Canada each and every day. This argument becomes even more untenable given President Obama’s approval of KXL South. Moreover numerous scientific studies have concluded that Canadian oil is no different than heavier crude we import from say Mexico or Venezuela. Moreover, it is similar in consistency to Californian crude. Finally, numerous environmental studies have already shown that there is no environmental impact as a result of the pipeline being completed.

With three of the four phases of Keystone in operation or nearly complete, only one section remains. Phase four, now known as KXL, will add 400,000 barrels per day to the existing Keystone system, and up to 25% of that new capacity is reserved for U.S. crude.

There is no disagreement with respect to needing new pipelines to carry U.S. Bakken crude and no one really believes that adding 300,000 barrels per day on top of the 2.5 million we currently import from Canada will significantly exacerbate climate change.

So why would anyone be opposed to Keystone?

A recent New Yorker article on California billionaire and anti-Keystone activist Tom Steyer may help shed some light on the matter. In addition to disclosing that he’s an investor in one of Keystone’s major competitors, the report suggests Steyer is using Keystone to galvanize the fractured and disjointed gaggle of environmental groups behind a common cause.

But while this final leg will not tip the earth’s ecological balance, it will make transportation of oil resources safer because it will carry U.S. crude from the Dakotas to market, replacing rail and highway traffic. But added safety isn’t the only benefit Keystone will bring. It will also make our country less dependent on foreign oil.

The U.S. now produces over 60% of our nation’s energy demand, a significant accomplishment not seen in decades. While domestic production will continue to climb, the country still imports 7.4 million barrels of oil per day with Canada accounting for approximately 30 percent of that total, followed by Persian Gulf countries and Africa at 28 percent and 16 percent of imports respectively.

Keystone will help facilitate a more predictable and steady supply of energy from a friendly North American neighbor, a development that should be of particular interest to all Americans given the instability the crisis in Syria is causing in the global oil marketplace and the impact that is having on gas prices. While the U.S. must lesson its reliance on fossil fuels, we must also ensure that the oil we do require is procured from a stable source and it must be moved in the safest manner possible.

Time is indeed running out, so too are the excuses for not approving the last part of Keystone.