For the more than 300 people aboard Asiana Flight 214, the ten-hour flight from Seoul, South Korea to San Francisco was by all accounts, a picture perfect flight. That of course all ended in the blink of an eye as the Boeing BA -0.54% 777 wide-body jetliner owned and operated by South Korea’s Asiana Airlines lined up for its final approach to Runway 28 Left at the San Francisco International Airport after traveling almost all of the flight’s 5,664 mile journey. 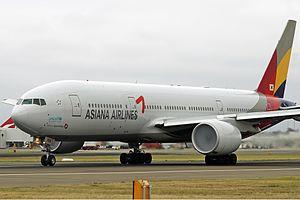 A few seconds later, the plane inexplicably suffered a catastrophic failure, its tail and landing gear shorn and the main passenger cabin coming to rest in the airport’s infield. Although 123 passengers escaped without significant injury, another 181 were hospitalized or treated at the scene for injuries and the crash left 2 dead. 49 remain in serious condition at area hospitals.

USA Today has reported that passenger Janghyung Lee told the paper that the aircraft rattled wildly before landing. What we do know is that the aircraft “landed short” meaning that its wheels touched down prematurely, well before the runway threshold line. No aircraft is supposed to land short of that line, and normal landings occur 500-1000 feet beyond that line.

Other passengers reported the aircraft failed to assume a nose up posture as is typical just prior to touchdown. Such an attitude is responsible for decreasing airspeed and arresting the descent rate so that the aircraft touches down in what is known as “ground effect.” When all goes well, the aircraft touchdown is smooth.

What is known is that Flight 214 experienced a “hard landing” short of the actual landing threshold. Although the area prior to the landing threshold is paved, this “under & overrun” is not always designed to handle the physical weight of such a massive aircraft. Moreover, the pilots themselves would have observed cockpit and runway visual aides informing them that they were approaching the runway along a glide path that would result in a short landing in what is commonly referred to as being “below glidepath.”

Aviation experts are generally withholding judgment until the aircraft’s black boxes have been analyzed by the National Transportation Safety Board (NTSB) and the Federal Aviation Administration (FAA). Late news from the NTSB revealed that although the pilot at the controls had only 43 hours in the 777, he had logged more than 10,000 hours. The NTSB also reported that the aircraft was traveling below its landing speed of approximately 137 knots when it crashed but said that it would not speculate as to whether the aircraft stalled. That said, several theories have already emerged on what might have happened. Based on reports pieced together thus far, pilot error is suspected, although other transportation safety experts tend to believe that the aircrafts electronic systems, especially the engine’s electronic control units may also have played an issue. Here is a quick rundown of the various theories. 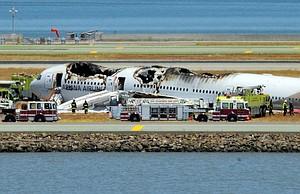 An Asiana Airlines Boeing 777 is seen on the runway at San Francisco International Airport after crash landing on July 6, 2013. (Image credit: AFP/Getty Images via @daylife)

The first theory involves weather. In cases of significant weather, small, yet very intense updrafts and downdrafts, known as microbursts, have caused aircraft to lose altitude without warning. The best-known crash was Delta Airlines Flight 191, a Lockheed L-1011 TriStar (similar in appearance to the DC-10) which crashed on approach to the Dallas Fort Worth Airport on August 2, 1985, killing 137 of the 152 aboard. Delta 191 may have experienced a phenomenon whereby vertical winds reaching over 150 mph literally pushed the aircraft down into the ground. In Asiana’s case however, inclement weather didn’t appear to be a factor at San Francisco.

Another possibility is that the crew misjudged the beginning of the runway. The Instrument Landing System (ILS) was turned off, and in fact had been turned off for most of the summer. This means that the crew would not have been able to utilize their instruments to align the aircraft to the runway. This alignment includes a left and right of runway bar as well as an above and below glidepath bar designed to ensure the proper altitude is maintained until the plane passes over the runway threshold.

That said, many veteran pilots have concluded that the system is not only unnecessary, but that pilots are routinely cleared for visual approaches unless the weather requires an instrument landing. In fact Asiana 214 was cleared for a visual approach to the runway.

Still, inexperienced pilots have been known to depend entirely on advanced electronics instead of flying by visual clues. Even so, the aircraft is equipped with instruments to determine the aircraft’s exact altitude above the ground. A Radar Altimeter is a device which bounces radar waves off of the ground to give pilots their exact altitude. Moreover, the gauge also allows pilots to measure their rate of descent and to set minimum warning levels.

Most airports also maintain a visual light system which is utilized day and night to inform the pilots visually if they are on the correct glideslope. This two light system, known as a Visual Approach Slope Indicator (VASI), would have warned any aircraft below glideslope by displaying a red over red lighting configuration. That system is designed to present any approaching aircraft with the proper three degree glideslope so that the aircraft touches down at the appropriate landing point. According to initial reports, San Francisco’s Runway 28 Left does have an advanced version of this system, a four light Precision Approach Path Indicator or (PAPI) installed along the left side of the runway as is depicted at a similar runway in the above photo.

Finally, the aircraft’s own rate of descent instrument would have informed the pilots if they were descending too rapidly.

A likely scenario is, however, one in which a highly experienced flight crew failed to maintain proper cockpit coordination and communication. Regardless of how new the check airman and Captain were, both had tens of thousands of hours between them. Lets also keep in mind that at least one, if not two co-pilots would have also been in the cockpit in the jump seats. Absent mechanical defect, this is most likely, and sadly, a case where overly experienced pilots got behind the aircraft in what pilots refer to as “behind the eight ball.” In such a scenario, indecision leads to complacency and in effect, the plane flies the crew instead of the other way around.

Even if this were the case however, the 777′s auto-throttles would have compensated and adjusted airspeed. The absence of this occurring suggests that the auto-throttles were not activated. Even so, the aircraft’s visual, auditory and physical speed warning systems should have alerted the pilots of the need to take corrective action. Early indications that the aircraft stall warnings and rudder shakers activated meant that the aircraft was traveling between twenty and thirty knots below landing speed, a situation that should never have occurred.

The tail strike is another telltale indicator of what may have occurred. Eyewitnesses report the aircraft maintaining a flat trajectory until seconds before impacting the ground. The raised nose at the moment of the tail strike is telling. As the engines begin to produce thrust after application of full throttles, the aircraft will pitch upward. Under such a scenario, the pilots must actually apply forward pressure to keep the nose from pitching upward. It is this last second pitch that most likely caused the tail to strike the ground. In such a case the pilots would have actually had to be ready to lower the nose, which may seem to many to be counterintuitive.

The result would be similar to the initial clues found at the accident site: A hard landing short of the runway which ripped the landing gear from the aircraft and caused the tail to be sheered off of the fuselage with the remaining portion of the aircraft careening out of control down the runway until it came to rest on the airport’s infield.

The NTSB investigation is expected to take approximately six to nine months. Flight cancellations are expected to continue into the work week. This comes on top of 450 cancellations on Saturday, and the 275 cancelled on Sunday. Approximately 370 flights were also delayed Sunday according to FlightStats which tracks airline flight information.